Most of us have heard about the seven sins that are usually talked about-Lust, Gluttony, Greed, Sloth, Wrath, Envy and Pride. As humans, each of us exhibit at least one of these during our lifetimes. 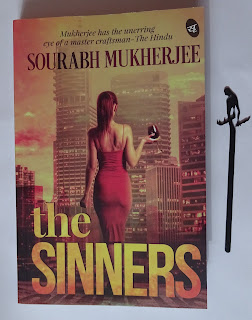 The Sinners by Sourabh Mukherjee is the story of Vikram Oberoi, who is found dead in his penthouse. A few hours ago, news channel were talking about him and a sex scandal in the company he was heading, NexGen Technologies. Was it someone inside the firm vying for his position, or was it some competitor trying to edge him out? The Sinners is a fast-paced thriller that moves around Mumbai to Japan and back to unravel some very complicated stories and bringing out a tale filled with corporate warfare, illicit relationships and ruthless seduction games.

The Sinners by Sourabh Mukherjee explores the seven sins in a very different manner that creates a good story. With each character having a motive and a deep back story, each page in the story is a plot twister and manages to keep the thrill moving along. Sourabh has taken up the main plotline of corporate warfare and created a world where anything that can go wrong with the protagonist, does. The plot is strong, and I loved the way the story was treated, and no loose ends were found. The climax of the book was a bit turn down but moving on, slowly it made sense.

The Sinners by works because of the strong characters that Sourabh has created. With each character sublimely attached to one of the seven cardinal sins, the character development is really good. The protagonist, Vikram Oberoi, flushed with Lust, Pride and Greed, creates a path to his own doom. The way he treats his life, it becomes difficult to sympathize with him as a reader. His Boss, Dev, was full off Pride and we see how he creates situations for Vikram to do what he does. Talking about other characters and their association with the other sins is a classic spoiler and hence, I would prefer if you read the story and draw your own conclusions. Overall, character development is what makes this book, what it is.

I can surely say that the title of the book, The Sinners, is extremely apt and describes the story in the most concise manner.